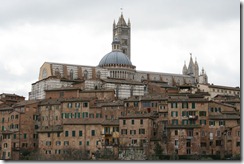 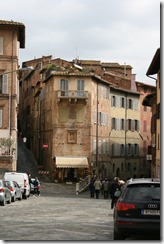 Also in the Tuscany region of Italy is the small city of Siena. About an hour from Florence, it doubled as our wayside stop on the way to Rome. After wandering through a local market of mostly clothes, we enjoyed a walking tour of the city with our local guide, Sarah. Beautiful narrow streets winding through the city opened up in several places to overly large cathedrals that have been standing for more than 800 years. We were able to spend a good chunk of free time in the large and beautiful city center to eat lunch and shop. It is here where they have the famous horse races 2 times per year. Ten of the 14 surrounding regions enter a horse and rider to have only the winner crowned. A sandy base is put down for the horses to run, and yet many often finish without a rider due to the lack of rules for the race. It was the first time we saw a good amount of sun and we greatly appreciated it. 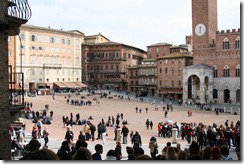 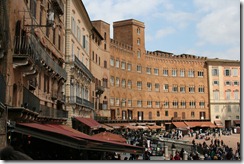 We travelled the remaining distance to Rome, arriving in time to drive through the city to our hotel. Since there is relatively little in the way of mass public transit, everyone owns a vehicle. Many have small cars, but there are very many scooters and motorcycles, too. Let me be clear: You are crazy if you drive in this city. My friends from larger metropolitan areas might be more accustomed to everyone driving as if they were in a taxi, but it is not for this guy. We checked in and walked toward Vatican City to dinner. Along the way we passed several merchants set up along the Tiber river. They were the beneficiaries of their convenient location for us on our walk back – everyone picked up a little something.

Since I was now familiar with the route and it was still relatively warm, I decided to take an evening run along the well-lit streets. I went back to Vatican City, worked my way around the temporary barricades up to St. Peter’s Basilica, touched it, then headed back. Unfortunately for me, it was near here that I tweaked my calf about as far away from the hotel as I could be. It was a slow walk back and I dreaded the full day of walking I knew was ahead of me tomorrow.