Yes, they’re sort of the same thing, but technically Vatican City (The Holy See) is a different country within the confines of Rome. We got a preview of Vatican City and St. Peter’s Basilica the night before on the way to dinner and it looked spectacular. Couldn’t wait to see more today. 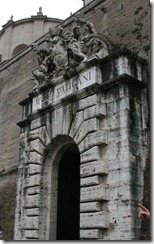 Thursday morning was cloudy and a little rainy (again, argh!) as we boarded our bus to the Vatican museum. Since we’re still in Italy our group needed another local guide, so we met (what’s-her-name) outside the wall that is the border between Vatican City and Rome. A quick tip for visitors is to get to the museums at soon as you can. Wait a little longer and you will spend too much time waiting in line to get in. As a group we didn’t experience too much of this, but we passed many families and non-groups patiently waiting in the rain for their turn to go in. 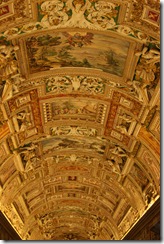 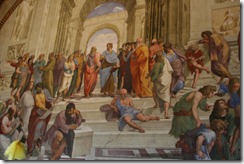 Luckily, pictures were allowed inside the museum and I have plenty to share HERE. There was an absolutely stunning collection of artwork, statues, paintings, and tile work all over the walls, floors, and ceilings. The tour ends with a walk through the Sistine Chapel which, as I’ve retold many times, is “just” a chapel. It’s not a huge cathedral, it’s not even a church – it’s only a chapel on the scale of the Vatican. It’s big, but it’s a rectangular open room with spectacular paintings on every surface. The famous ceiling  is almost too far away to fully appreciate. No pictures inside the chapel so I settled for a postcard. It was equally amazing to realize that only a few weeks prior to our arrival the cardinals were locked inside selecting a new Pope. Speaking of, he was holding a mass in St. Peter’s on this Maundy Thursday morning so the inside was not going to open to the general public until 1:00. When we left the tour and were back in St. Peter’s square (which, of course, is an oval), the line was already several hundred people deep. We made the executive decision to see more of the city rather than spend time waiting in line. While I was sorry to miss the inside of St. Peter’s – giving me a reason to go back – it was the right choice given how the rest of the day turned out. 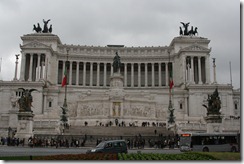 We hopped a bus across the river to an area around several famous monuments and resumed our trek through the city. Our first stop was at the Altare della Patria (a.k.a. the wedding cake) that serves as Italy’s tomb of the unknown soldier. Clocking at just under 100 years old, it’s a brand new building compared to many of the other artifacts and ruins that dot the city. It was here we got our first glimpse of the the 2000 year-old Colosseum down the street – our next goal. 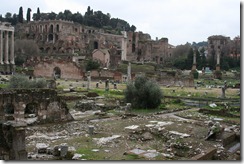 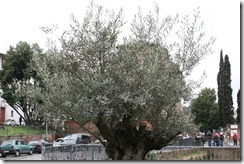 The brief walk between the two sights took us by a couple of miscellaneous ruins that are not at all unusual. In fact, that’s why there aren’t more than 2 subway (metro) lines under the city. Whenever they begin digging, more ruins are discovered and progress is halted for the sake of preserving history. 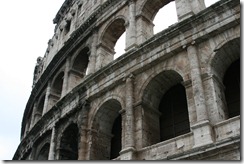 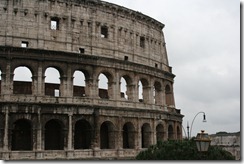 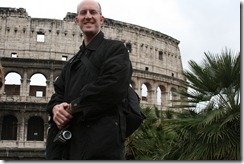 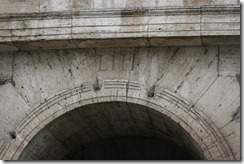 Next up was the Colesseum. It kept getting bigger and bigger as we approached. It’s a full-on, massive, stadium whose scale was was difficult to capture. It’s truly an amazing structure. And it’s mostly still standing! We didn’t go inside – again, something for next time – but we were told it’s less impressive than you might think. 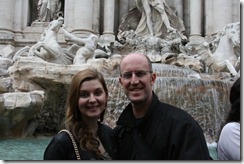 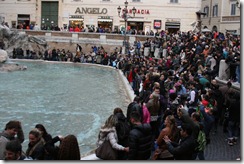 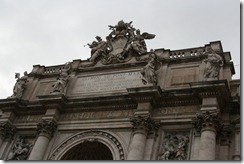 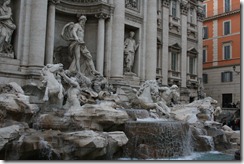 Continuing our walk we stopped for gelato – best in Italy according to Luigi, and I would agree – and went past the home of the Italian president on our way to Trevi Fountain (Fontana di Trevi in Piazza di Trevi). Of course we threw our Euros into the fountain over our left shoulder, ensuring a return trip to Rome. 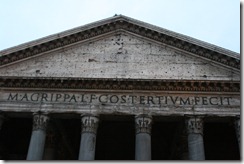 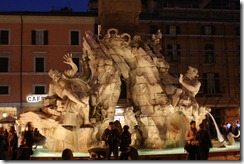 Our final monument of the day was the nearly 2000-year-old Pantheon. Again, there was a mass going on so we couldn’t go in, but the square out front was a good place to regroup. Some shopped, some had their first espresso, and some of us old folks rested. Darkness was coming, but there was one more piazza we were going to hit before we found our hotel. In Piazza Navona local artists were selling their paintings and drawings and I finally picked up something for home.

What a great day. Another 20,000+ steps walking the streets of Rome. Back to the airport tomorrow morning for the long ride home. Thankfully, it was a much more uneventful flight home.