Today was our day in Florence. We hopped on our bus and were in the city within an hour. In a word, Florence is spectacular. The small streets, the little shops, the huge cathedrals, the museums, the Arno river, and the view of the city from the Piazzale Michelangelo are all part of this great Tuscan city.

Our first stop was the Galleria dell’ Accademia which houses a Michelangelo collection, including the David. (No pictures in the Accademia.) Another local guide named Jan from Denmark was with us for the day and walked and talked us through the fantastic statues in this museum. It was surprising to see so many partially finished statues by Michelangelo. According to Jan, he kept many projects going at the same time so he could eat. When commissioned to complete a statue, he had to show progress to receive payment. Many concurrent projects meant a steady stream of income. Not only talented, that Mike guy was a shrewd businessman. 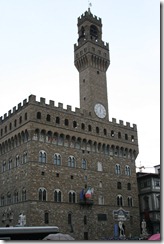 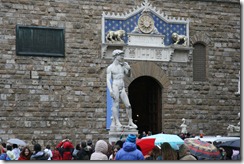 In addition to the original, there are 2 copies of David in the city: one in the city square (Piazza della Signoria), and one in bronze at Piazzale Michelangelo overlooking the city. We were fortunate to be able to see them all during our visit.

The world-renowned Uffizi Gallery was next and it was definitely a popular attraction. Hundreds and hundreds of people were all under the overhang trying to stay dry this afternoon. While waiting for our turn to enter, I thought we would abandon this museum and continue on. Luigi again worked his magic and got us inside. (Again, no pictures allowed.) Works by Botticelli, da Vinci, and Raphael are all over this impressive collection. 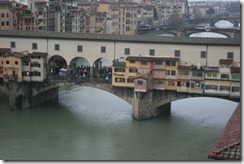 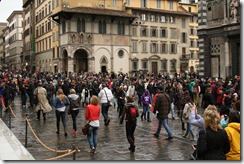 The only place where photos were allowed inside Uffizi were out a window overlooking the Ponte Vecchio bridge, rebuilt in 1345. 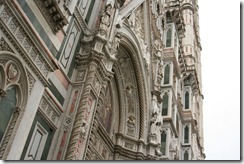 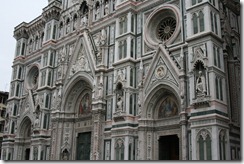 Touring the city we went inside the famous Basilica di Santa Maria del Fiore (the Duomo). The big dome you see below in the photo? This is that church. It’s so ridiculously large that within the confines of the small streets it was difficult to photograph in full.

We had a little down time and were able to do a little shopping at an authentic leather shop – friends of Luigi, everything at least 50% off. Nice place, lots of different kinds of leather available. Clare picked out her birthday present – a thin leather jacket made from goat. 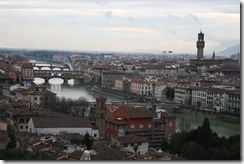 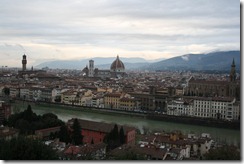 Before we left town, we took the short trek up to Piazzale Michelangelo to get a birds-eye view of the city. On a little nicer day this would have been spectacular. As it was, it was still pretty great. 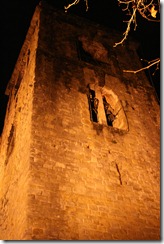 When we returned to Montecatini Terme we had the opportunity to ascend the hill to Montecatini Alto via the funicolare. While it was after dark, we still had a great rail journey to the top, lovely views of the city from above, and a quick visit to the church in Alto.

(No, I didn’t remember the names of the various palazzos and piazzas throughout Italy. Wikipedia is your friend in these circumstances.)