Before we headed out on our long road trip, we stopped by the final studio of Paul Cezanne. It’s a quaint little house he designed that is still very much like it was when he died in 1906. It was great to walk on his floor and look through the same windows that he did while he created his most famous paintings. Many of the still life objects were still in the upstairs studio and it was fascinating to compare things like the real ginger jar with the one in the painting. His coat and hat are still hanging on the hook where they were over 100 years ago. 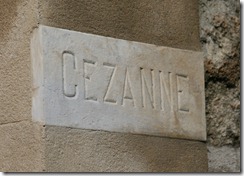 The bus ride to Montecatini Terme took us through some of the most beautiful countryside we’ve seen on our trip. The combination of mountains to the north and the Mediterranean Sea to the south showed off the beauty of southern France. We passed by the independent country of Monaco (just east of Nice) that is truly the jewel of the area. That goes on the of bucket list of places to visit. 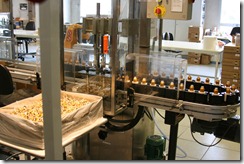 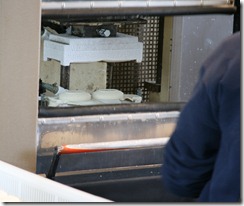 Unbeknownst to the group, our tour guide and the teachers had a couple of surprises for us along the way. Our first detour took us to Grasse, France to the Fragonard perfumery. Oh, boy. Begrudgingly, I’ll admit it was fairly interesting from a scientific point of view. We learned how different flowers from around the world are used to create the different scents and the concentration differences between perfume, eau de parfum, eau de toilette, and eau de cologne. If you’ve got the right olfactory perception, one can even become a “nose” and work to differentiate and create new scents. A bus full of high school girls was the perfect audience for this stop. Instant gifts for everyone back home.

Into Italy – where everything is better according to Luigi, the Italian – it was getting late while we approached the hotel. If we still went to the final stop, we would have to be coy when speaking with the hotel staff. This will make us late for dinner and they won’t be happy if they found out we went to Pisa. Yup, the place with the tilting tower. OK, we promise we won’t tell. Even though it was at night and the lighting wasn’t dim, it was pretty great to spend a little time admiring this building that should be on its side. I had not known there is also a baptistery and the other big stone building in the same grassy area. Everything was fenced off while we were there, so we couldn’t get very close. Still a great experience. 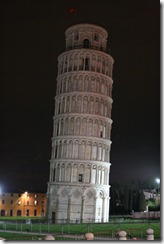 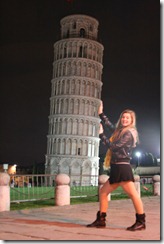 Oh, wait! While coming down the stairs late to dinner, I passed a woman wearing a bright red Wisconsin Badgers sweatshirt. Me: “Are you from Wisconsin?” Her: “Appleton!” Me: “Sun Prairie!” Together: “Wow!” What are the odds we would run into another group of Wisconsin travellers in Montecatini Terme, Italy, in the middle of March? At least 10:1. At least.