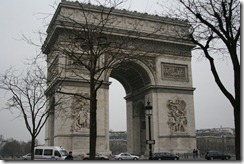 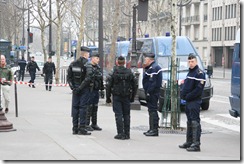 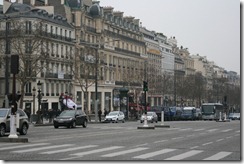 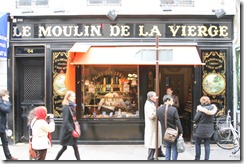 We had the morning to ourselves as we prepared to leave Paris. Our small group decided to walk to the Arc de Triumph and go to the top, hop on the Metro to Notre Dame, do a little shopping, grab lunch, and come back to the hotel. As far as plans go, we didn’t come close to this one. We did walk to the Arc at a more leisurely pace and arrived to find scores of gendarmes in uniform guarding the roundabout. (The roundabout is absolutely crazy. It has enough room for 8-10 cars side by side, but there are no lanes. It’s a mad free-for-all.) Through a conversation consisting of broken English and pantomimes with a friendly French guard, we found out there was a “meeting” going on nearby with very important people. With as many police as we saw in full tactical riot gear, it was clear this was no ordinary meeting. We found out later there were protests going on – none in our area – and the police were ready for the worst. OK, we’ll take our pictures and move on. We decided to walk down the Champs-Elysees to shop a bit and find the nearest metro stop. The first metro station we came to was closed and locked; probably because of the potential protestors. All right, we’ll walk down a bit further and grab the next one. On the way, we stopped in a 5-story Louis Vuitton store and made the mistake of going inside. While beautiful and fully staffed – a new employee every 15 feet, bon jour, bon jour, bon jour – the items were ridiculously overpriced. Who shops at these stores? It wasn’t unusual to see purses for 1500€ and necklaces for 4-5000€. The most expensive thing we saw was a diamond watch for €110,000. Clare got the tsk tsk for trying to take a picture of it. Time for us to go.

Unfortunately for us, the next metro stop was also closed. There’s now no way we’re making it to Notre Dame – too far to walk and we don’t have enough time. Change in plans again. We’ll circle back to the hotel and see whatever is on our way. We popped into a few other shops and found a cute little bakery for lunch. The popularity of the place told us it was a good choice. A never-ending parade of customers streamed through while we sat and had a light lunch. I think I had the best croissant of my life. Perfectly flaky, rich with butter, each bite better than the last. Yet another Starbucks visit and a tacky souvenir shop near the base of the Eiffel Tower and we were back at the hotel just in time.

Next on the agenda was a substantial train ride to Aix en Provence in the south of France. From the hotel the entire group got back on a bus for a quick trip across town to the train station. This was the biggest cluster of the trip so far. We arrive at the station, wait a bit while Luigi claims our tickets, and then head to the actual train. After waiting about 30 minutes we finally board the train that has been sitting in front of us the whole time. By now it’s full as can be, we’re searching for places to put our luggage, and we’re spread all over too many train cars. Everyone and everything is on board, but a few of us end up sitting on the stairs between the upper and lower floors of the train cars. Some of the girls were bumped from their seats by other passengers with assigned seats. Only a few of us were sitting with our fellow travellers. I’m old; I had a seat. The train ride itself was  actually quite pleasant. High speed, smooth tracks. The French countryside whipping by was speckled with cows, sheep, towns, houses, and roads – not unlike what you’d see while travelling across this country. The weather was overcast and a bit dreary, but the novelty of the high-speed train ride south across France kept our mood positive. We arrived in Aix to meet our new driver, Francesco, who would be with us all the way through to Rome.

The evening’s activities were unplanned so we were free to do as we pleased. We all walked to the main plaza in town with the (seemingly) obligatory fountain, then broke apart and found dinner on our own. The strategy we employed was one I would recommend to all: Walk down the main streets of the town, check the alleys or side streets, and pick an out-of-the-way place at random. Ours had a neon pizza sign that was calling us. Multiple pizzas, a bottle of Bordeaux (correctly pronounced), and delicious desserts were consumed by all. Beyond the type of wine, we had a major language breakthrough when we clarified the difference between sauce and sausage. I never realized how close those two words sound, yet their meanings are obviously quite different. Since it was a Sunday night and still drizzling a bit, we headed back to the hotel for a relatively early night.

I forgot to mention I took advantage of our day on the train to go for a run in the early
morning. I got in 6 miles along the Seine to the Louvre and back on a cloudy day. Easily my most unique outdoor run. The run skews the total a bit, but my pedometer says I topped 26,000 steps today.
Ugh.