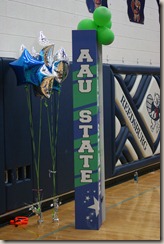 Congratulations to Clare for finishing her first year in AAU gymnastics last weekend! Reedsburg High School was the venue for the AAU state meet, for which she qualified earlier in the year. The quick summary is that she earned two top 5 medals in beam and bars and took 9th on vault in the 13-year-old division. Due to various issues, she scratched on floor which took her out of the running for the all-around.

She competed at the Intermediate Optionals level for the first time this year which she really enjoyed. It allowed her to focus on her strengths and stick to those skills that make her look good. Her beam routine had a couple of wobbles but was very well done. It’s amazing how graceful she can be while spinning, leaping, and running on that narrow beam. On bars, she was solid as ever using someone else’s grips. (Of course her grips ripped the week prior to the state meet. Not enough time to replace and break in a new pair.) Great routines!

One interesting note about AAU is that there is no age limit for the competitors. There were 3 or 4 ladies who were beyond high school, the oldest being 42! The girls mocked them slightly for their simplistic skill set, but I give them a lot of credit for performing in front of a good size crowd at this meet.

That said, it looks as though this will be Clare’s last year in competitive gymnastics as she looks for other athletic opportunities. Not to worry as she’ll still be in the gym keeping her skills up but on a less demanding schedule.