If you’ve seen me lately, no doubt you’ve seen the headphones or ear buds in my ears. I’m a huge fan of podcasts and always (yes, always) listen to something when I’m not doing anything else. Heck, I’ll listen even when I’m doing something else. It’s just audio, right? Very easy to multitask. In fact, I’m doing it right now…

My iPod Touch was *sniff* a good friend. Until last weekend.

I stupidly slipped my iPod into my back pocket before the UW hockey game and it, as you can see, cracked mercilessly. I had done it a hundred times before with no repercussions. No biggie, right? I discovered it when I got home and immediately my mind went to figuring out what to do next. 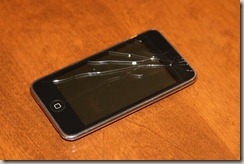 (Interestingly, I’m a bit surprised at how this picture turned out. The front/bottom edge is in focus, but the far corner is quite blurred. I sort of understand why it happened, but clearly, I need to take more pictures to know what to expect when the shutter clicks.)

Back to the issue at hand. I remember recently seeing a video of someone replacing the screen on an iPhone and, while difficult, it was doable and relatively cheap. The down side was that it was time-intensive. It would take a few days to receive the replacement screen plus a day or more to do the fix. And it might not be successful. Or I’ll snap something during the process and be back at square one. I have other mp3 players (no iPods) that I could use in the interim, but they wouldn’t be as smooth. My experience has been that an iPod Touch or iPhone are by far the best listening devices.

I don’t need more hoops to jump through, so I decided to replace the iPod immediately and try to salvage the old one anyway.

After finding a replacement kit on Amazon for $15, I ordered it, received it, and it’s waiting for the operation. I’ll try to capture some video of the process and post it a bit later. Wish me luck.